Psalm 30:11     You turned my wailing into dancing, you removed my sackcloth and clothed me with joy.

(This story is based upon a true event that happened in my daddy's cotton field back in the 1950's.  A woman actually delivered a baby in the cotton field while picking cotton.  The names, story and artwork, however, are mine.)

Cotton Caulder was born in my daddy’s cotton field one hot fall day back in the 1950’s.   She’s the daughter of Sweet.  That’s her mama’s name not her disposition.  Sweet was as wide as she was tall, 4 foot 9 inches.  Lived over in Samtown; picked cotton.  No one even knew that she was pregnant, she may not have known herself.  I have heard of such things happening.  Sweet’s husband, Rufus, used to snuggle up against her and with a great big toothless smile, say, “Acers and acres and she’s all mine.” Sweet would just smile and then hit him hard over the head.  Might be where he lost his teeth.  People didn’t cross Sweet, no sir, didn’t cross her at all. 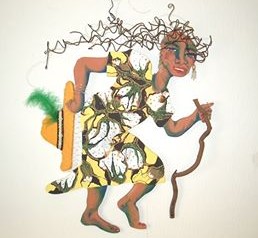 It was cotton picking season.  The weather was hot and humid for a fall day.  No one wanted to go into the field, but the money was needed, and the cotton had to get out of the field before the heavy rains came and soaked the crop.   I don’t know which would be worse, people being soaked to the bone or the cotton.
The pickers were relieved when noontime came.  Everyone piled into the truck and we headed for Tommy’s Grocery buying moon pies and R-ah C colas. Sweet wasn’t with us.
“Must have run off,” said one.
“Naw, Sir, bet a mean ole rattler gots her,” said another, causing some to scream.
“Don’t you go worrying none ‘bout my sweet, she’d bite that ole rattler’s head off if’in he’d come near her.  Yes sir, bite that ole head off, I tells you,” said Rufus.  They all laughed at the sight of that.
“You right, Rufus, ain’t nobody gonna cross that woman of yours.”


Returning to the field, daddy parked under one of the pecan trees and everyone sat around eating.  Some stretched out and took a brief nap before going back to work.  At the end of the day, everyone returned, dragging in slowly with their full loads of cotton.  As they sat around the wagon, waiting for the big man to weigh the individual bags, Sweet came in carrying a full load of cotton and a brand, new baby girl.


They named her Cotton and she grew up playing in the fields,  or working, helping hoe.  When she was ten her mama couldn’t stand to look at that child anymore and ran off with another man.  Rufus, not knowing how to take care of a ten-year-old girl, sent Cotton to Chicago to live with her Auntie.


When Cotton was seventeen, she moved once more, this time to Harlem to live with other relatives.  She said she didn’t ever want to go south again.  She was a good dancer and tried out several of the clubs, but that didn’t appeal to her.  One day she heard of the Rockettes.  Didn’t know anything about them but they were having tryouts.  She went.  She got the job.


She was quite the dancer, that Cotton.  Kicked higher than others and had to learn to control her enthusiasm.  People started calling her “high” Cotton.   Cotton worked hard and eventually was given the coveted position of being front center.  Things worked well for several years, that is, until the accident.  Once, while performing for the President of the United States she kicked too high, lost her balance and broke her partner’s nose, causing the whole line on her left to fall, while breaking her hip in the process.  Bless her heart.


Here’s a tip:  Don’t kick and break a hip or your career will go zip.


© Nippy Blair 2015. Posts and pictures on this blog cannot be copied, downloaded, printed, or used without the permission of the blog owner, Nippy Blair.
Posted by nippy's neighbors at 7:58 PM