Of Chinese Food and Ice Cream 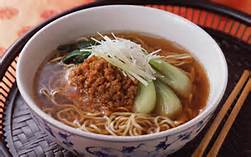 My mama had cervical disc troubles for as far back as I can remember. She never knew when it would cause her discomfort.  Bending over could cause it to seize up or just sitting. It was unpredictable.  Once it happened on a Sunday morning, during church, while she was singing in the choir, barefoot I might add, her favorite way to sing.  Bless her heart, she sat there until the service was over before she would ask for help. That back ailment was a source of irritation.


At night or toward the end of the day, her back would entrap her and often our next door neighbor, Dr. John Rozier, our family doctor and a most kind, loving man, would amble over and give her a shot to ease her pain and free up the muscle spasm. There's not a better life to enjoy than to have a loving, friend who happens to be a doctor living next door. We didn't want to take advantage of him, but we did.

Daddy never ever really quite understood this problem with Mama because as far as I can remember, he never, ever was sick. He never went to a dentist, never went to the doctor, never had any ailments that I am aware of while we were growing up. He was healthy as a horse. He never took a sick day. He truly believed that mind was over matter. If he was unwell, he never let on because he continued taking care of business. He expected Mama to do the same. He expected us, children, to do the same. He was incapable of understanding what it's like to be ill. This man lived in his own world. He never ever helped clean the house or cook a meal or wash clothes or shop for his own clothes or cigars. He never helped put the four of us to bed. He never came and read us bedtime stories. He never came to kiss us goodnight. It was the way he was raised. It was the way his generation was raised. I'm not putting him down or feeling bitter, this was just the way he was. I understand, and I know we were well loved. But I also know, that when Mama was down, Annabelle our maid, took care of us.

So you're asking what in the world does all this have to do with Chinese food and Ice Cream? The answer has to do with Mama having to go to the hospital. There are only two times in my life that I remember when Daddy thought he was in charge. Now the first time I don't remember much because I was only six or seven. Mama developed a case of encephalitis and eventually had to go to the hospital in New Orleans. Daddy decided that it was just absolutely nothing to running a household of four children under the age of eight. Annabelle took care of us, except for supper leaving Daddy to think he was completely in charge, especially with the meals. Daddy had spent a year in China during World War II and thought he knew all about Chinese food. He spent a great deal of time preparing chow mein or fried rice. Sometimes it would be kung pao chicken or sweet and sour pork. Oh, and the pickled vegetables were always nice. Ha! Sometimes he would be cooking way past our bedtimes. We hated his cooking, mainly because we were children under the age of eight. His food was terrible, it smelled bad and we didn't like the way it tasted. We had two choices: eat what he fixed or go to bed hungry. Thankfully, Annabelle rescued us during the day with kid friendly meals. We were full as ticks by the time Daddy hit the kitchen with his “gourmet” meals. He never understood why we ate so little of the food. You can imagine how elated we were when Mama did come home again. I was a grown person and married before I would even try Chinese food. It tormented me for years. So that is the Chinese food question taken care of.

So what about the ice cream?

Well, that had to do with the second time Mama went to the hospital in New Orleans. This trip had to do with her cervical disc discomfort that kept her bent over like she was searching for something she lost on the ground. It got so bad that eventually she became bedridden. The orthopedic surgeon insisted she needed surgery. I was grown and out of the house this time. Poor Mama had rods and pins and screws implanted in her back and stayed in the hospital in New Orleans for close to a month. Daddy took care of himself, even washing his clothes and cooking for himself. But not without consulting one of us as to where the washing machine was and how to use it. I refused to visit for fear I would be coerced into cleaning the house. My brother said the dishes were piled high in the sink, filthy. It got so bad that we threatened to bring the garden hose inside for him to hose off the dishes before she returned.

During this time, Daddy ran out of cigars. He called me to go get them. I didn't. He called someone else. They didn't. He finally realized he had to get them himself. First, he had to call for directions. While out hunting for the cigars, he decided to explore and see about this WalMart every one was talking about. He must have really been bored because this man had never, ever been inside a store that I am aware of except to campaign. I would have loved to have been a fly on the wall when he walked into WalMart. He had no idea they could have so much stuff under one roof. I can imagine that he spent hours wandering around the store like country come to town, mouth hanging open, amazed at the sights he saw. He couldn't wait to tell us about it. “Did you know that you could shop all day for anything you wanted in one store? Anything. You name it and they have it,” he said. “Why you could even eat there. They have a little cafe right there in the store,” he explained. We laughed. We suggested he try other stores in town to see what they held. He declined, saying, “No. It's too big. Mama can shop there if she wants.”

Eventually, Daddy decided to visit mama in New Orleans. He knew the directions, he said, since he delivered her there in the first place. So he went alone. We heard from Mama later that he got lost but found his way eventually and didn't want us to know. Which explains why three weeks later, it was time for mama to come home and he wanted me to travel with him. All the way there he kept talking about this place in Gonzales that had, absolutely, the best ice cream he had ever eaten. It was smooth and piled high on a cone or you could get it in a cup. "I never tasted something so wonderful," he said. I suggested we stop when we arrived in Gonzales, which we did. “Quick, turn off here, it is just over there,” he said excitedly. I did. Suddenly he said, “Here, pull in here,” he was practically shouting.
We were at a MacDonald's!
A MACDONALD'S!!
DADDY'S FAVORITE ICE CREAM WAS AT A MACDONALD'S!!!!
THE BEST ICE CREAM IN THE WORLD WAS IN GONZALES!
At a MacDonald's!
Can you believe it?
“Daddy, you've got to be kidding,” I said, “we have this same ice cream in Alexandria. You can get some every day if you want.” He didn't believe me.

Poor Daddy. He may have been a state senator and entertained governors and other high officials around the state but I guess you just can't take the country out of the boy.
Bless his heart! 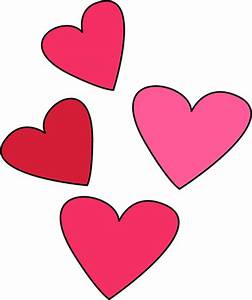 We tried to educate him further, to no avail. He was content to live in his own little bubble. And yes, he did think that after Mama was home for a few days that she should go buy his cigars and cook his meals again. Thank goodness for dear, sweet Annabelle. What can I say? Gotta love him.

It has now become my family tradition when traveling to New Orleans to stop at MacDonald's, in Gonzales, for the best ice cream in the world. “Cheers, Daddy.”

© Nippy Blair 2015. Posts and pictures on this blog cannot be copied, downloaded, printed, or used without the permission of the blog owner, Nippy Blair.
Posted by nippy's neighbors at 5:54 AM 2 comments: 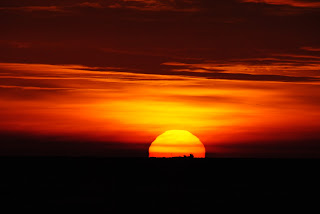 I witnessed a miracle today. I watched the world come alive while sitting quietly by my window. I stared into the black darkness while sitting in my favorite chair, my dog, Gumbo, in my lap. We gazed into the darkness, our minds wandering to thoughts only the two of us could comprehend. Occasionally, Gumbo would look into my face and quickly bestow a kiss as if to say that she, too, understood what a moment we shared.

Slowly, from the dusky dark I saw a cloud peeking through the trees as if an angel decided to visit our solitude, teasing us with its hide-and-seek. It appeared perfectly still behind the Sycamore, but as the two of us froze in place I noticed it slowly creeping forward. It was not a large cloud, just a simple little cumulus one trying to liberate itself from its obscurity. If I had not been so still I would not have even noticed its insignificant self in the first place. But there it was, peeking through the branches, tantalizing us. I watched that cloud slowly rise above the tree, scoffing as it metamorphosed to a glowing pink fringed with a yellow outline into its fully white self. We were too mesmerized with the miracle that we failed to notice that the sky had joined the game as well, becoming different shades of color.

And then it happened. The sun in all of its glory peeked above the horizon. Suddenly the whole world seemed to wake. The light became more intense. We watched lazy cats yawn and stretch before leaving their naps to seek nourishment. Birds began to whistle their cheerful greetings. Squirrels chased each other in a game of “you're it”. I expected that at any moment someone would be dancing down the street singing “my, my, my what a wonderful day” while holding their coffee in one hand and the morning paper in the other. It was that kind of day. A day only the movies can make or, at least in this situation, a day in my absurd imagination.

What a miracle Gumbo and I witnessed, in ten minutes time, the beginning of a new day bursting into being. What a miracle to go from liminality to glory in such a tiny moment of time. Thank you, Lord, for this one miracle and me being still enough to notice.

Tonight, as I compose this, I hear the miracle again as the tree frogs sing their love song to the evening outside my window. 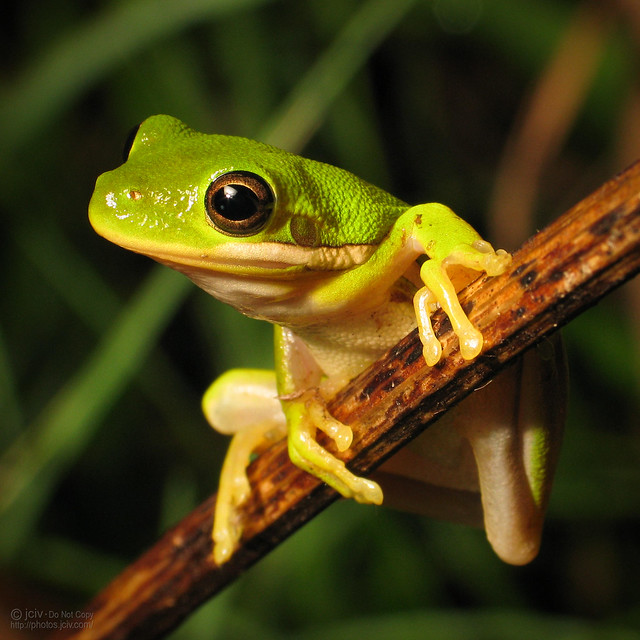 Lord, I pray that I will pay attention to more of these liminal moments and embrace them for the miracles that they are.


© Nippy Blair 2015. Posts and pictures on this blog cannot be copied, downloaded, printed, or used without the permission of the blog owner, Nippy Blair.
Posted by nippy's neighbors at 5:10 PM 2 comments: