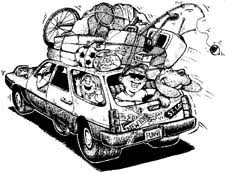 In the summer of 1956,Mama made up her mind that it was time for the Blair's to have a real family vacation. Something we had never done before. Our vacations usually consisted of Mama taking us, one by one, to New Orleans, or all four of us to see Grandma and Grandpa George. Becky was thirteen, me, twelve, Bobby, eight and Jane six. The four of us were excited, well actually five of us, counting Mama. Daddy was not at all interested. He had been to the WAR and China and traveled in the Navy and frankly, that was all he ever wanted to do again. Mama was determined just the same. “The children are old enough, Cecil, and they need to have a fuller, more rounded education other than sitting around here in Alexandria,” she said. “I've already found the perfect place to go. Cherokee, North Carolina. It's the ancestral homeland of the Cherokee Indians. It offers natural beauty, family attractions, outdoor activities and the rich history of the Great Smokey Mountains. Even you would enjoy it. It is just an hour drive from Ashville and we could stop by and see my favorite uncle Brunson.

I guess all that needling Mama did, back in their bedroom every evening, worked because we did actually go on our first and ONLY family vacation. The trip happened two weeks after Mama officially announced it, although we all knew in advance. Hay, we have ears. We knew what was going on. Actually, Bobby, figured out how to use the new intercom and had often listened, secretly, to private talks in their room before. He heard them discussing this vacation trip and told us.
Our 1954 two tone Green Buick Station Wagon was loaded as tight as a tick the night before our adventure. Have you seen those Chevy Chase movies about vacations? Well, you get the drift.

Daddy wanted an early start since we would be driving to North Carolina. That was a laugh. Have you ever tried to herd four free range children into a car for a long day traveling? It ain't easy, even if they are excited about the trip. Well, first of all, the night owls were still snuggled tightly in their beds at six A.M.(this being Becky and Jane) while the boys were already out and about the farm doing chores or whatever even though Dave and Annabelle were there to take care of everything while we were to be gone. Becky, of course, being thirteen, needed to still choose the correct outfit to wear, call her best friend, take a shower and fix her hair. Thank goodness she wasn't wearing make-up yet, or we might still be waiting. Jane, the grouch, was wakened best by Mama bringing her a big ole' glass of HEMO, with a raw egg mixed in, before cautiously nurturing her from the bed.
In case you don't know what HEMO is, well, it was a staple in our house, an instant chocolate and malt mixture Mama stirred in our milk, and we children thought it was the best thing ever for breakfast....even better than TANG.

By the time she rounded up the boys and got the girls up and about she was fit to be tied. In fact, the longer it took the more frazzled Mama became and it didn't help that my brother knew that and deliberately got on her nerves to see her reaction. Of course, all Daddy did was sit in the car, stewing over his cigar and occasionally blowing the horn in frustration which in turn made Mama more nervous and upset. With three kids almost in the car, Mama noticed that something smelled. Bobby had gotten into something in the barn lot and needed cleaning. With words I can't repeat, Mama yelled at Daddy and his response was, “We don't have time for that, get those kids in the car. Now!” So off we went, ready or not, impatient Daddy, frazzled Mama, smelly brother and very unhappy siblings who didn't want to be in the back seat with ole' stinky.
We should have known that this was a disaster before it started because Daddy was furious before we left the driveway. He was a no nonsense type of guy who's mantra was “get 'er done”. None of this, “Oh, look at that! Let's stop and take a break. We could use the bathroom, Cecil,” type absurdity

His idea of driving someplace was get there, see the place and get the hell back home. And that is pretty much how he wanted the trip to be.
I'm sure we appeared as if grizzly bears had taken over our lives and were about to eat each other for lunch but just the same, that Saturday morning, we left grouchy, upset, smelly, and in tears ready for an adventure. First, Mama wanted dirty Bobby to be by a window which resulted in a lot of punching and shoving and touching. We complained, “Mama, why should he get the window, Becky and I are the oldest and we always get the window."  "It's not fair. Mama."  " Bobby won't leave me alone."  "Mama, Jane's sitting too close."   "Mama, Nippy made me lose my place in the book."  "Mama...”   This is when we heard the first “If you kids don't behave, I'm gonna turn this car around and no one will be going anywhere.” Becky, looking up from her book, said, “We haven't even left yet. How can you turn the car around in the garage?” Which brought Daddy to the boiling point while the rest of us started another round of crying and begging and pleading, promising to behave.
We had barely left Louisiana before the familiar whines of “are we there yet?” began. 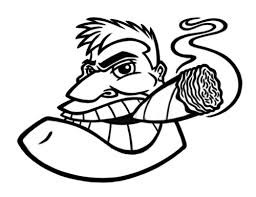 This time Daddy kept his mouth shut but he puffed harder on that big ole' black cigar, like a train going up a mountain, and when not puffing, chewing the end off and spitting it out the window which usually hit the kid in the back seat since we had no air conditioner and all the windows were down.

Of course, the recipient of the chewed tobacco was either me or Becky since we shared the window behind the driver which started a whole new round of whines.

On occasion we played lots of car games that Mama came up with for entertainment, Becky, of course, read a book all the way, except to complain about the occasional tobacco flown in her face.
Bathroom breaks were few and far between which resulted in a lot more whining and a lot more, “If you children don't behave, I'm gonna stop this car and head home,” while swatting at the ducking bodies with his free hand. Without seat belts, we were over, under and around that back seat like puppies.

As we approached Tennessee, and to keep Daddy off our backs for a while, Mama pointed out all those Burma Shave signs, reading them to us. Jane, being six, and barely reading, complained when she didn't get to read the entire one herself or when she didn't understand it.


Mama also pointed out the red barns which seemed to multiply the closer we got to Lookout Mountain, always with a cheerful, sing song voice. Daddy couldn't get over those red barns with “See Rock City” all over their tin roofs. “You'd never get me to advertise like that,” he'd huff every time we passed one. “Talk about trashy.”

(Years later, I wish I had remembered this when, as a teenager, I had to paint “The Old Gray Mule” on top of Daddy's barn roof because he wanted to advertise his vegetable stand. I would have loved to have reminded him).
Naturally, our first real stop was Ruby Falls. I remember riding down the elevator and how cold it became. Jane was scared, stinky Bobby wanted to climb over rails and jump up and down on the elevator. Becky heard a voice that sounded familiar as we exited into the cave. It was a DJ's voice that she listened to on our local station, KDBS, KDixie. He was commenting about something in his shoe. You would think he was a famous movie star the way Becky gushed over him, so shocked that someone famous from home would be here in the same cave. It was a rather embarrassing situation for the rest of us, but she did get his autograph. Teenage girls and their heroes. What can I say?
Day three we left mid morning, of course, and drove all the way to Cherokee, North Carolina, about a three hour drive. We had to stop at a gift shop to enter the reservation and of course the shouts of, “Gimme, I want one of these, please, Daddy, please,” continued. That night we were exhausted and slept well.
Day four. Daddy woke us up early and announced, “Well, we've seen all we want to see. Pack up the suitcases, we're heading home after breakfast.” Again, more whines and crying. “But, Cecil, we haven't seen everything yet and besides, we haven't gone to see Uncle Brunson. It is just an hour away.”
“We need to get home. The closest way is down by way of the Florida panhandle. End of story. You'll see Uncle Brunson another time.” This was the first time the car was silent.

While stopping at a refreshment stand on the beach in Florida, Daddy got us snacks while we ran down to the gulf.

Then we heard screams as Mama came barreling down the beach, kicking off her shoes as she ran, yelling, “Don't get in, don't get in. It's dangerous. Stop. Stay out of the water.”
She had heard there was a very strong undertow and it was dangerous to enter the water for fear of being swept out to sea. Too late, Jane was in the water and moving away from us. Becky screamed. Mama immediately without hesitation, rushed in the water and grabbed Jane while the undertow pulled them away. Daddy had to help both of them struggle back to shore. “That's it, kids. In the car. We aren't stopping again until we get to the house,” he demanded.
I think that is exactly what happened too.


Daddy never took the whole family on another vacation again and Mama never got to visit her favorite Uncle.

© Nippy Blair 2015. Posts and pictures on this blog cannot be copied, downloaded, printed, or used without the permission of the blog owner, Nippy Blair.
Posted by nippy's neighbors at 3:01 PM No comments: