How I met Frances

The Princess and the Frog 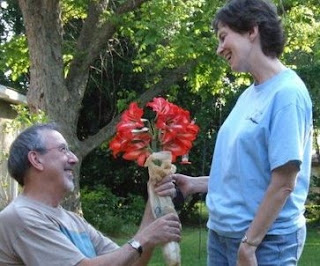 Everything in my life is complicated.  I am not the norm for doing anything.  My drummer is not even  a drummer, folks.  Yea, that's right.  In fact, I think I march to the tune of a digeridoo.  Look it up.  Take computers, for instance.  No.  Let's don't.  That's a whole different mystery book all together.  So let's talk dating instead.   Why should anyone be surprised if things didn't go exactly as they should for me when trying to date.?  Dating shouldn't be that hard, should it? Like, you know, ask a girl out for a date, girl accepts, you get something to eat before or after, you make conversation to find out about each other and everyone has a great evening, or not, then you take her home.  Isn't that what man has been doing for centuries?  Well, I tend to get tongue-tied when I tried to date the opposite sex.  Now, I realize that most men are in the same small boat that I'm in - actually, I think it's more of a yacht - but anyway, our brains seem to short circuit.  It's in the genes, I'm sure.

Now as a teenager I had no problem talking to any girls that were friends.  But asking one out on a date was a whole different ball game.  My brain just froze and I failed to make coherent sentences.   That happened to me way too often in high school and college which is why I didn't really date much.  I did much better just hanging around, being a clown, laughing and enjoying company with both sexes, never being very serious.

Then I met Frances and things were no different.   Now, I need to give you some background information before I go further.  To begin with, I knew Frances before I knew Frances -well, I knew of her.  And she knew me, sorta.  You see I was in the army overseas in Vietnam, on temporary duty to Tokyo, Japan when I first heard of Frances.  I was sent to Japan to put together a brigade yearbook for my unit in Vietnam. Who wouldn't take advantage of leaving Vietnam for three months to put together a yearbook?  I was no dummy.  It so happened that I had a friend that lived down the street when we were growing up, that was stationed in Japan at the same time and he was married to a girl I once briefly dated in college.  Emphasis on the "briefly".  Sam was going TDY to Korea at that time and his wife Jill was pregnant.  So I was checking up on her and making sure she was all right while Sam was gone.  Jill kept telling me about her twin brother who was dating some girl from South Lafourche  at the time, named Frances.  Jill told me all about Frances, and I politely listened. Meanwhile her brother, David, kept hearing about this friend  that was taking care of his sister while her husband was on TDY.  He told Frances about his sister's friend, and she politely listened.  God was matchmaking at the time and we were totally unaware.

Skip a few years.  I left Vietnam, spent a year at Fort Knox, Kentucky, got an early out to finish college and get my degree.   Since I didn't want to live at home or in the dorm, I talked my daddy into letting me move into a house that he owned on Shirland Ave. in Alexandria.  It had been vacant for seven years, holes in the floor, peeling wallpaper, tiny little leaks sometimes when it rained, and all that stuff.  Who cared?   I was a bachelor.   Fun times.   Frances, had graduated from Northwestern and had moved to Alexandria to teach.  God was still matchmaking, but we were totally unaware.

Frances rented a room from a lady that was a second mother to me, Mrs. Madie Carter.  I had known her for years at church while growing up, and her daughter, Linda, and I had been friends for years.  In fact, Linda was married to a long time buddy of mine, Bob.    Mrs. Carter invited me to come over and have a meal and meet this Frances and invite her to church.  I refused.  She asked on several more occasions.  I refused every time.  God was still trying to be matchmaker and I was not getting the memo.

Meanwhile, Frances had been visiting several other churches and finally decided to visit Emmanuel.  She ended up joining the church.  I, sheepishly got in line to meet her.  When I introduced myself, she quietly said, "Oh, you're the one that Mrs. Carter kept inviting over to eat and never came." I, hung my head in shame and nodded, yes.  When I left church that day, I kicked myself for not paying attention to Mrs. Carter.

Weeks passed.  Frances and I both were in the same singles Sunday school class.  Weeks more passed and I finally got my tongue untied enough to ask Frances out on a date.  I had always been a fan of musicals, having performed and danced in several, so when the movie "Cabaret" came out I tripped over my feet and asked if she would like to see it with me.   She refused, saying she had seen it  before and really didn't want to see it again.   My tongue suddenly unfurled itself and wrapped it's long silly self around my legs while I whispered "okay" and slid out of the room.   Stupid me.  It never dawned on me that I could ask her to go somewhere else instead. Strike number one. I'm sure God was shaking his head and bad mouthing me under his breath.

Eventually, I managed to dislodge my tongue enough to speak coherently and ask Frances out again.  She accepted and we had plans to see a better movie.  To say the least, I was nervous.  Finally the day arrived for the said "man-meets-girl-man-dates-girl" event.  WHAT!!!!  IT RAINS!  Not the ordinary rain that we frequently get in Louisiana.  Oh, no!  This was more of a flood!  The kind that Noah must have seen when he built his ark.  It rained buckets.  If I had looked outside, I'm sure I would have seen the Cajun Navy floating by.  Remember the house I mentioned I lived in?  Well, the roof leaked.   Oh,  did the roof leak?  Wow!  Every room in that rickety old house decided that this was the day for me to mop the floors. It rained.  It poured.  The old man upstairs snored.  The water came down in every room , ran across the floors and exited the holes in the floorboards.  I was soaked to the bone as I mopped.   I called Frances and told her that I was not going to be able to go on the date because I was having to mop my floors.  That stupid tongue of mine didn't let me explain that all the rooms in my house were leaking.  Oh, no.  That would have been too normal.  No, no.  I left the conversation there and hung up.  Strike number two.  I'm sure God was slapping his forehead now and giving up on me.  No telling what Frances thought.

The next Sunday, in Sunday school, I think Frances sat completely across the room from me and never looked my way.  I certainly didn't have the courage to speak to her.

Weeks passed.  I couldn't unwrap my tongue enough to ask her out again.  She and I sang in the choir and went to Sunday school and hardly spoke.  I became involved with the youth at church, directing choreography for musical numbers.  We planned a trip to visit the Louisiana Girl's School in Ball, Louisiana to perform.  I was going as a chaperone.  I asked Frances if she would like to be a chaperone too.  She agreed!  The third time's the charm, right?  I had a date.  Not sure if she thought it was though.  But I did pick her up and take her home.  So, finally, after all these months of agonizing torture, I finally had my date with Frances.

We even held hands!
I began "courting" her.   I asked if I could come over and watch TV with her.  Mrs. Carter chaperoned.  We went places.  We became a couple.  We got married.  She has put up with me for forty four years now.  God with his perseverance didn't give up on us and I am grateful.

At our wedding we made more discoveries as to how God ordained us to be together.   My grandparents attended, and the first people they went to hug and visit were her family.  Grandpa had been a pastor at their Methodist church years ago.  Her aunts and uncles knew my grandparents.  Wow.  Both of us looked surprised to learn this news.

© Nippy Blair 2015. Posts and pictures on this blog cannot be copied, downloaded, printed, or used without the permission of the blog owner, Nippy Blair.
Posted by nippy's neighbors at 5:49 PM 2 comments: