Luke 15:4   “What man of you, having a hundred sheep, if he has lost one of them, does not leave the ninety-nine in the wilderness, and go after the one which is lost, until he finds it?” 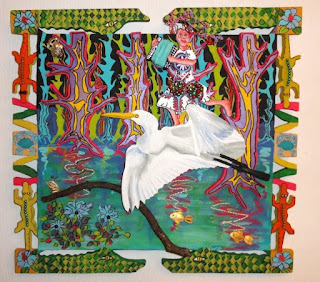 It was still dark that Monday morning when the moss gatherers met on Elijah's barge ready to caravan to the swamps for a few weeks work.  “Bring da lanterns,” Emile shouted.  “And don't forget your spikes, like da las time, Baptiste.”   When daylight came the moss fleet headed down Palmetto Bayou traveling on the narrow float roads.  Following the barges with the cabins housing the womenfolk and children and supplies were the skiffs holding derrick like platforms from which the men worked.  They hoped to be at the camp site by nightfall as long as there were no mishaps.  Surely not this trip since they had the priest himself bless their fleet before leaving Pierre Part.


Isabelle was on the lead barge in a basket with her baby rattles made from rattlesnake tails even though she was close to two years old.  Her mama liked her being there while preparing the evening meal.  Grandpere was playing his accordion in his favorite chair on the front of the barge.  Then it happened.  The barge hit a cypress stump which was just below the surface, sawed off during low water.  Everyone disappeared in the murky waters.  Men, from the caravan, frantically searched but found no one.


Days passed and the search party finally left since the area was too treacherous.  Nothing was found of the Comeaux family. Everyone was believed to have been eaten by the alligators.


Years passed and no one gathered moss in this area again for years, believing it was cursed by the Gris Gris.


One year, the grandsons of the first moss gatherers decided to take a chance and work this same bayou since it had some of the best moss around.  They no longer believed their parents warnings.  One evening, after everyone was settled in for the night, music could be heard coming from the swamp.   Men turned on their lanterns, and shouted for Te Emile to stop that music, thinking he was playing the accordion, but he was fast asleep.  They went back to bed after much grumbling.  Tomorrow would be the roughest day what with setting up camp and making racks on which to hang the moss to dry.


That night they continued to hear strange noises in the swamps, not paying too much attention at first, but this music was different.  It wasn't the bellowing of the alligators, or the shrill cry from the birds or the wind making noises in the trees. This sound was remarkably like an accordion playing.    The women were beginning to be spooked, thinking the Gris Gris really was in this part of the swamp where the Comeaux family died.  They begged the men to leave someone at the base camp for protection when they left to gather moss the next day.  The music continued day and night.


One afternoon while, gathering the moss, one of the men discovered a basket containing rattlesnake baby rattles and clothes.  A note attached to the basket said “Isabelle Comeaux”.  Could this be the remains of the baby from the crash that their grandparents talked about?  The men broke camp immediately and left that very night.


Absolutely terrified, no one comes to that area of Palmetto Bayou any longer.  Word has been passed down, again, from village to village about the spirit of Isabelle Comeaux haunting the swamps, while playing the old Cajun music of their grandparents.  She flies, through the air, on an egret.  Rumor says she is protecting her family from others disturbing the graves.


So.  If you hear some accordion music while deep in the swamps, perhaps it is only Isabelle Comeau trying to pass the day.  Stay clear or you might be eaten by the alligators as well.


© Nippy Blair 2015. Posts and pictures on this blog cannot be copied, downloaded, printed, or used without the permission of the blog owner, Nippy Blair.
Posted by nippy's neighbors at 9:54 AM 2 comments: