Lena Hall
A memory of a favorite person


I was back from the war in Vietnam, 1970 and still had a year of service left.  After a brief leave at home, I was sent to Fort Knox, Kentucky where I worked in a photo lab printing and enlarging negatives.  I didn’t mind the work at all but living in the barracks with forty or more men was nerve wracking for an introvert/extrovert.  I needed space and time alone.


The room at the barracks was divided into open cubicles. There were eight of us in double bunks crammed together at the back of the room.  The other seven and I were not compatible at all.  They drank every night, came in drunk every weekend, and gambled on the floor in clusters all the time.  There was always loud music into the night.  On top of all that, the base trained artillery nightly.  Which meant that loud noises were heard, and me, just back from Vietnam, was still gun shy.  Many nights I would hear the artillery and jump from bed and run for the bunkers and safety.  It was an automatic response.  I was miserable.


Here I was alone, living in a situation I found deplorable.  I needed help.
I NEEDED TRANSPORTATION!
I had two friends in the lab that were in the same situation.  About a week later, the three of us rode a bus to a Volkswagen dealership in Louisville.  We all bought 1970 Karma Ghia’s.  My friends bought convertibles and I, a two- door coup.  I paid $2800.00 cash with money I saved from my tour overseas. Yes.  You read those figures correctly.   I now had freedom.  There are no words to describe the feeling of paying cash for a new car and then driving it off the lot that same day.  None.


I drove the long way back to the base. I discovered things that day.  One was the town of Elizabethtown and the other was the Severns Valley Baptist Church. The next Sunday, I visited that Baptist Church.  After a few more visits, I joined the church, which I’d been taught was the proper thing to do.  I made friends and joined the choir and a Sunday school.  Life felt normal except for my situation on the base in the barracks, which was still just as deplorable.


Before long, I ended up sleeping in my car, most nights, because my seven bunk mates would harass me. At first, I slept in the base parking lot and then later I ended up sleeping in the parking lot behind the church.  I mentioned this to a man in the choir one day and he suggested I move off the base.  He then introduced me to a lady he was kin to, Mrs. Lena Hall, who was living alone just a few blocks from the church.  She was not that sure of renting to a stranger, nor I from a lady that had violets in vases everywhere and crocheted arm covers on all the furniture.  After our visit we learned we had a lot in common and we agreed to try it for a while.


I went to my sergeant and explained to him I was moving off base to Elizabethtown.   I gave him her name and phone number.  The sergeant explained that single men were not allowed to live off base unless it was with some relative.  I said, rashly, “She is my grandmother.”  He called while I was standing there before I had time to let her know what I told him.  I was scared.  She answered, “Yes, he is my grandson.”  Wow!  I knew this was the best thing ever, and, I knew Mrs. Hall and I would be great friends.  I moved off base.


She made room in the corner of her basement for a bed and a dresser with an old quilt draped over a wire, for privacy.  It was comfortable.  Eventually she invited me upstairs to watch TV with her.  We became fast friends.   I admired some hand punched rugs on her floor which she had made.  She taught me how to make them.
Because of Mrs. Hall, I developed a love for folk art and rekindled my desire to return to college and finish my art degree.


I took her places on weekends. I used to laugh at her because she began leaving her purse on the stand by her chair, next to the front door, and the very mention of, “Would you like to go somewhere?” would say, “Let me find my purse.” Then reach over, grab it and say, “Here it is.  Ready.” 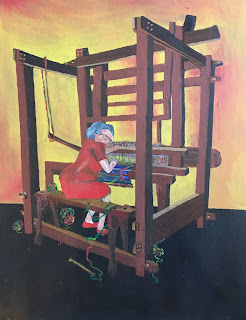 Once, we saw an old weaving loom.  I expressed the desire to own one and learn to weave.  She told me stories of someone in her family that wove, reassuring me that we could learn also.  She called her son, Jodie Hall, who traveled around Kentucky and asked him to keep his eye out for a loom.  He found one way up in the woods somewhere in the area at an estate sale.  An elderly couple were giving up the farm.  The loom was in parts, in a pile sitting next to the barn.  Jodie reassured me that if anything was missing, he could probably make the lost part. Everything was there, however.  I bought it for $13.00 because no one else bid on it.  I should have bid lower, (ha)! Jodie helped me move it to his mother’s basement.  We learned to warp it and then to weave.  Mrs.  Hall spent hours sewing rag strips for me to weave.  We made rag rugs and sold them at a Flea market.


On the ceiling of her basement she kept a quilt frame and often would sit quilting while I learned to weave.  One day, I decided that I would like to paint a quilt.  I bought a white sheet and we stretched it on her quilting frame so I could paint easier.  I painted one for her with red flowers, her favorite, taking it off the frame to measure how it was fitting on the bed and back to the frame.  When finished she and I drew patterns for the quilting.  We bought the filler and put the quilt together before she did the intricate quilting.   Then we made one for my mother in blue. 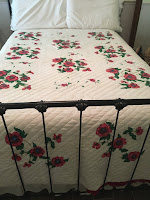 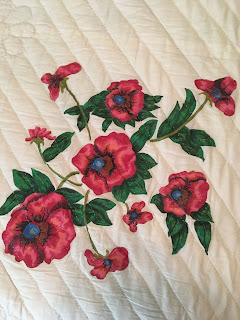 This painting quilts soon led us to another venture.
I was still wearing ties on Sundays and we decided for Easter that I should paint a tie and she would sew it.  We did. Which led to us making other ties and taking them on Saturdays to sell at the Flea Market.  This is the seventies, you know, and wide ties were the norm with bright designs and colors.  The two of us became quite a pair every Saturday at our booth.  We developed quite a following, in fact.  The basement became crowded with our artwork.  She suggested that I should move into the spare bedroom upstairs.  We became like family.

Her daughter, Alene and her husband were members of a square-dancing club and would go square dancing on the weekends.  I soon joined them.  I had never, really, square danced before but quickly loved it. There was never any trouble finding a partner.  I loved hearing the caller chanting, “Allemande left and do si do, roll away to a half sashay, ladies in, men sashay. Face your partner and a right and left grand.”  Watching the ladies (and men) in their bright matching costumes and club colors was always a treat.  Of course, Mrs. Hall made an outfit for me, too.  This became a regular on Saturday nights dressing up and traveling around this area of Kentucky and Indiana.


This elderly lady and I in my twenties were a match made in heaven.  I relieved her of the loneliness of living alone and she saved me from a deplorable living arrangement in the barracks.


I hated leaving her at the end of my tour of duty.  I even went to Berea, Kentucky and applied for jobs, to no avail.  It’s a good thing I did return home to continue schooling because I never would have met my Frances.


We kept in touch for a while, and even made a visit with my wife, once, but I was never able to return and visit her again.  I wish I had made the effort more because she was a large part of who I am today.  She made me see myself as the artist I am.  Thank you, Mrs. Hall for telling that sergeant I was your grandson.
© Nippy Blair 2015. Posts and pictures on this blog cannot be copied, downloaded, printed, or used without the permission of the blog owner, Nippy Blair.
Posted by nippy's neighbors at 12:13 PM