Proverbs 17:22. A merry heart doeth good like a medicine. 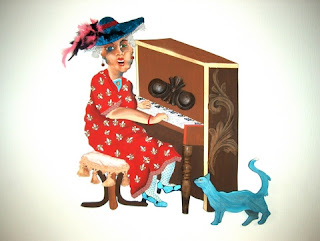 She was a Nazarene preacher’s wife, my aunt on my mother’s side, my grandmother’s baby sister  to  be exact: the Hoffpauir branch, the ones from Rayne, Louisiana. She and her husband were such opposites in so many ways. She was five feet tall on a good day with the proper shoes on and he was at least six feet five. She loved good food and good conversation while he looked as if bread and water were his only staples. They were Jack Sprat and his wife in every sense of the word.

Uncle Preacher, as we called him, was stern and erect. Don’t know if I ever saw a smile on his face. He was the kind that probably wore a suit and tie (dark ones of course) to bathe in and certainly wore one to bed. How he fell in love with Aunt Dolly is a mystery that is still discussed in family circles to this day, or better yet how in the world did she fall in love with someone so stiff and boring. They appeared to be a total mismatch, but I sensed there was love for each other, somewhere.
Aunt Dolly loved a good joke and was constantly trying to create ways to shock someone, especially her husband. She adored playing the devil’s advocate. “Lighten up, Claudius,” she would say, “People are tired of hearing that they are all going to hell every Sunday. They might listen more to your sermons if you weren’t so stiff. You have to bend, baby. Bend. There’s some interesting stuff in that Bible if you would just tell them about it. They need something to discuss over dinner.”
Aunt Dolly loved singing solos. The louder the better and it had to have a decent beat. None of those droll ole’ hymns for her, no sir. If she sang Bringing in the Sheaves then, honey, they brought those sheaves in a-dancing and a-jiving and rejoicing all over God’s kingdom, and loved bringing them in. She put a honky-tonk rhythm into everything she sang. I loved her dearly.
I remember one Sunday when the pianist was sick and Aunt Dolly decided to fill in without informing Uncle Preacher. As people solemnly filed into the church, expecting to be listening to a funeral dirge, or a quiet hymn, they were shocked as Aunt Dolly pounded on those keys, singing at the top of her lungs,  “I feel like Hell. I feel like hell. I feel like hel-ping some poor Soul. Do you feel like Hell, yes feel like hell, feel like hel-ping some poor soul?” The people had something to talk about over dinner that day.


© Nippy Blair 2015. Posts and pictures on this blog cannot be copied, downloaded, printed, or used without the permission of the blog owner, Nippy Blair.
Posted by nippy's neighbors at 9:15 AM